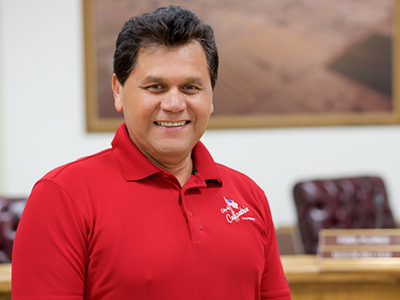 Rom has served as City Manager for the City of Calipatria for 15 years. Rom previously led the team at R.J. Medina Construction as owner. He is a graduate of Calipatria High School, received an Associates of Arts degree from Imperial Valley College, holds a Bachelor’s degree from San Diego State University and a Master’s in Public Administration from National University. Rom is also a Corporate Member of the International City/County Management Association.

Rom is highly active in the community and participates in various organizations including the Calipatria Lions Club, Calipatria Chamber of Commerce, Calipatria Little League Basketball Program and the St. Patrick Parish Council. He has served on the Imperial Community College District Board of Trustees for the past 20 years, 1995 - 2015, and has previously served as a member of the Calipatria Unified School District Board of Trustees from December 1987 through December 1995.